In this guide, you will find answers to the most common questions explaining how Linnworks manages FBA orders.

What happens when an FBA listing is sold?

When an FBA listing is sold, Amazon will automatically be aware of the order. Linnworks will then contact Amazon to request details of all the currently unshipped FBA orders.

These orders are then downloaded into Linnworks and saved to the FBA location that was created when FBA was enabled for that integration.

This is only applicable to those who are not using local or autonomous sync to download FBA orders. FBA orders sync automatically every 15 - 20 minutes. The sync smaller batches of orders but at a quicker rate making the sync efficient and reduces delays. Syncs have improved monitoring with each sync log being reported in automation logs. There are also additional safety checks in place to catch any skipped orders Linnworks was initially unable to download.

What happens when FBA process an order?

Linnworks automatically requests the status of any FBA orders that it has recorded. If the status of the order is changed by Amazon, this change will be reflected in Linnworks. This includes both Processed and Canceled orders.

Linnworks will also record the shipping courier used by Amazon as an order note. If that courier allocated a tracking number, this will also be saved against the order. 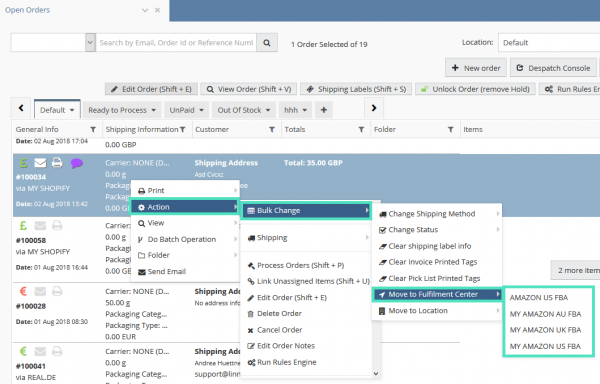 The order will then move to the FBA location and will be both locked and parked.

If there was an error attempting to submit an order to FBA, Linnworks will display a Label Printing error on the order and the exact Error Message can be found by hovering over the icon or looking in the Audit trail via Right-click > View order. Linnworks will retry to submit the order next time it synchronises.

Linnworks will keep track of FBA state changes in the order audit trail. Once the order is shipped by FBA FULFIL_STATUS will change to Complete and the order will be assigned a tracking number (if specified) and moved to Processed.

When sending an order from a non-FBA listing to FBA, the SKU that you use to represent the stock item may not be the same SKU that FBA uses. This means that FBA won't know what items to send, and will be unable to fulfil the order.

To work around this discrepancy, you can save the FBA SKU onto the stock item as an extended property. This is called a Fulfilment SKU, using the format below:

Property Name: The name of the FBA location in Linnworks
Property Value: The Fulfilment SKU that Amazon will recognise
Property Type: 'Fulfilment SKU'

When submitting an order to FBA, how does FBA know what Shipping Method to use?

This depends on the postal service method that is assigned to the order in Linnworks.

Why can’t FBA fulfil my order?

This may be because the address of the order is invalid, or the order item(s) does not have a correct fulfilment SKU.

Why is Linnworks missing some FBA orders?

Linnworks uses reports from Amazon to retrieve FBA orders and download them to the system and as such there should never be any missing orders. The only orders that will not be downloaded (therefore missing from Linnworks) are those that were received on the channel before FBA was enabled within Linnworks. When FBA is first enabled for the channel Linnworks will retrieve the shipment report and download the previous 28 days worth of orders and save them, any FBA orders older than this will not be downloaded.

In the FBA section of the Amazon Edit Channel window, there are two checkbox options; Send Declared Value and Convert Currency 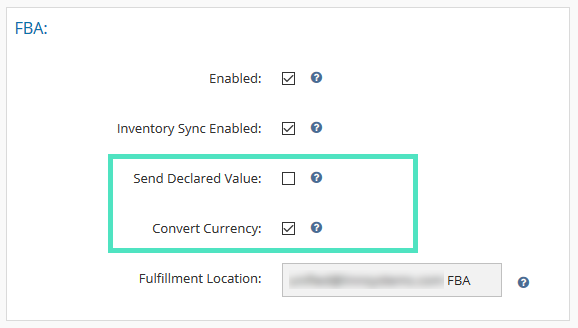 These are both completely optional and are not necessary for communication between Linnworks and FBA.

If you do not require the use of these settings, it is suggested that they are not enabled.